At Pipelining Technologies, Inc., we only use petroleum-free, non-toxic vapor that is approved for indoor and outdoor use and safe for both humans and pets. Please be sure to ask about the safety qualifications, licenses, and permitting of any services you choose to have when working with a provider.

A steady stream of vapor will be blown into the sewer, storm, or grease system via an access point such as a roof vent stack or a drainage cleanout. The vapor will then travel throughout the pipes, pressurizing the drainage system, and present itself at or near the source of leaks. In other words, the technicians will be able to identify the area(s) of concern where there is vapor present.

Sewer gas odor is most often described as a “rotten-egg” or sulfur smell. It’s sometimes laced with a moldy scent, but it is quite different from the usual bathroom smells.

Though not toxic at low levels, sewer gas contains methane, which is an explosive hazard. At extremely high levels, the hydrogen sulfide in the gas can make you sick and potentially lead to fatality, according to public health guidelines.

Once you suspect there may be an issue, you may wonder how to eliminate sewer odor and how to find the cause of a sewer gas leak. With more than three decades of experience in professional plumbing contracting and thousands of happy customers, our best advice is to schedule a Vapor Test.

Smoke/vapor testing is a fast and easy way to avoid having to tear open walls in search of the source(s) of toxic sewer gases/odors, insects, rodents, or water damage. Guesswork is eliminated since a visible element is added to the odor source.

If your shower drain smells like sewer gas, or there’s a sewer smell in your bathroom, you may greatly benefit from vapor testing.

Having the vapor test performed may save you from undertaking unnecessary repairs in an attempt to address the issues listed above. Sewer odors do not always indicate a major deficiency in the sewer pipes. The smoke/vapor test results may point to a simple solution, such as replacing a wax ring on a toilet or replacing a p-trap under a sink.

Areas Where Smoke/Vapor May Appear During Testing

During the test, the non-toxic smoke/vapor may appear in several locations. When there is a leak present, the vapor will first fill the void behind a wall or in the ceiling and then appear through the nearest wall or ceiling opening. Some of the locations that smoke may appear include:


Sewer smoke testing is a quick and easy way to pinpoint the source of the sewer gas leak.

During a smoke test, smoke/vapor may come from unlikely places, which may mean an easier fix.

Visible vapor usually indicates a leak in the surrounding sewer pipes, such as a bathroom stack, kitchen stack, or overhead pipe. The professional performing the test should have an idea of where the source of the leak is located at the first sight of vapor.

Once the general area of the leak has been identified, the technician may require further investigation by means of a small inspection camera which is inserted behind the wall via light fixture openings, outlets, etc.

Here at PTI, we have more than 35 Years of experience as Certified Plumbing Contractors in the State of Florida. If you are within our service area and are interested in having an inspection done of your sanitary drainage, storm drainage, or commercial greasy waste drainage system, we would be happy to help.

Our process starts with an in-depth assessment of your existing pipes. We use advanced technology to capture detailed measurements and conditions of your property’s pipes and build a streamlined plan to repair any damaged sections. Our inspections are much more specific than a plumber’s video, but we are always happy to review any current videos you may have.

Trenchless sewer repair eliminates the need for large-scale destruction of floors and landscaped areas to conventionally replace the damaged pipes, the costs associated with replacing those surfaces, and limits the exposure to health and environmental risks created by major sewer excavations.

When is the city responsible for sewer lines and sewer backups?

Individual municipalities have varying rules regarding the line where private property (including underground drainage) becomes public property. Generally, your private sewer main, or lateral, becomes the responsibility of the city at the tap to the city sewer. Blockages and backups in the city sewer system can cause backups on private property, so identifying the location of the blockage is very important as it relates to responsibility.

How long does it usually take to do a trenchless sewer repair job?

In residential homes, a good rule of thumb is “one liner per day.” For example, if your home has a building main, two bathrooms, a kitchen and a laundry, that is five individual liners, hence five days of work. On large-scale commercial or high-rise condominium projects, more aggressive timelines are typical, with anywhere from two to four liner installations a day.

Is there a warranty on the work that is done and the materials?

Would we have to leave the home or business while the work is being done?

No. Pipelining Technologies works to stagger brief water shutoffs in a way that residential customers will have some facilities to use each day of the project. Since pipe lining can be performed in a much shorter timeframe than pipe replacement, there are typically only a few days of slight inconvenience in comparison to several weeks of water shut off with conventional pipe replacement.

Does trenchless sewer repair work on tall buildings such as apartments or condominiums?

Lining of vertical stacks in high-rise buildings is amongst the most cost effective and time saving applications of trenchless pipe lining, also known as CIPP, cured-in-place pipe. Conventional replacement of a vertical stack on a building of significant height can take weeks, even months to complete, and the residents are without water to the affected facilities for the entire time. Pipe lining can accomplish the same job in two days by lining from the roof continuously to the underground with little to no need to enter individual units.

View in-depth videos explaining how the trenchless sewer repair process works as well as project spotlights showcasing some of our past projects. 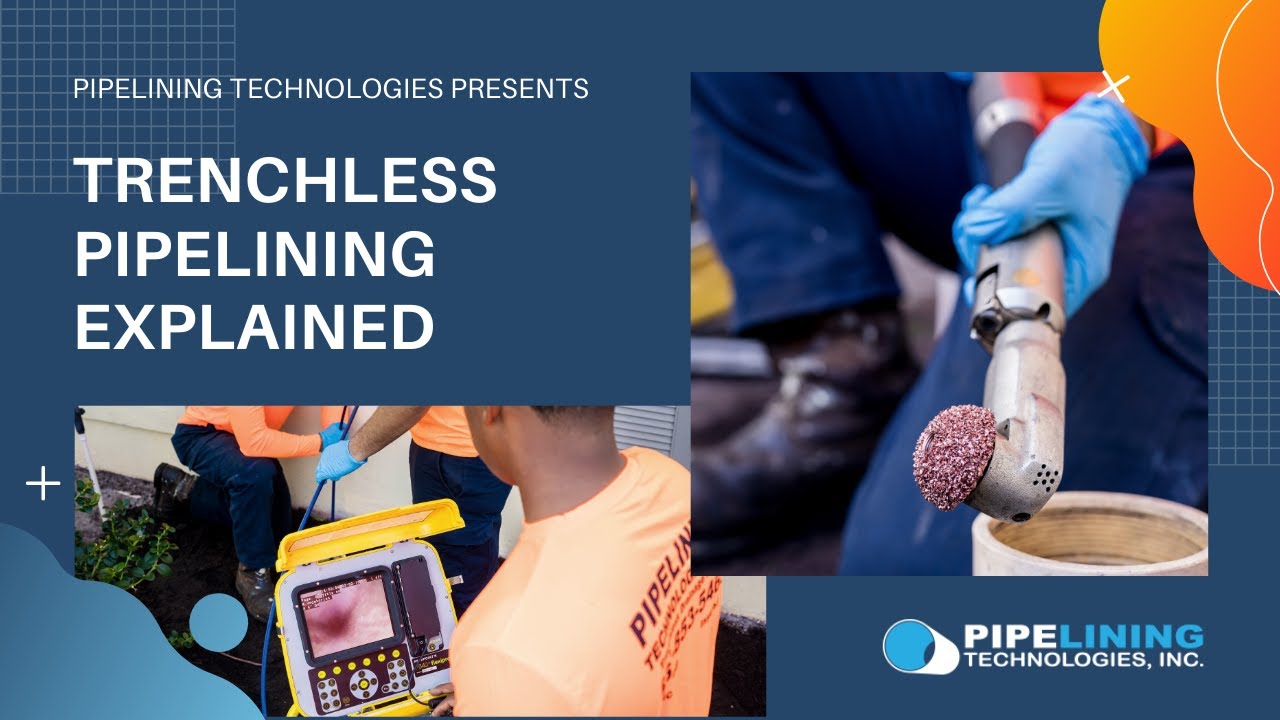 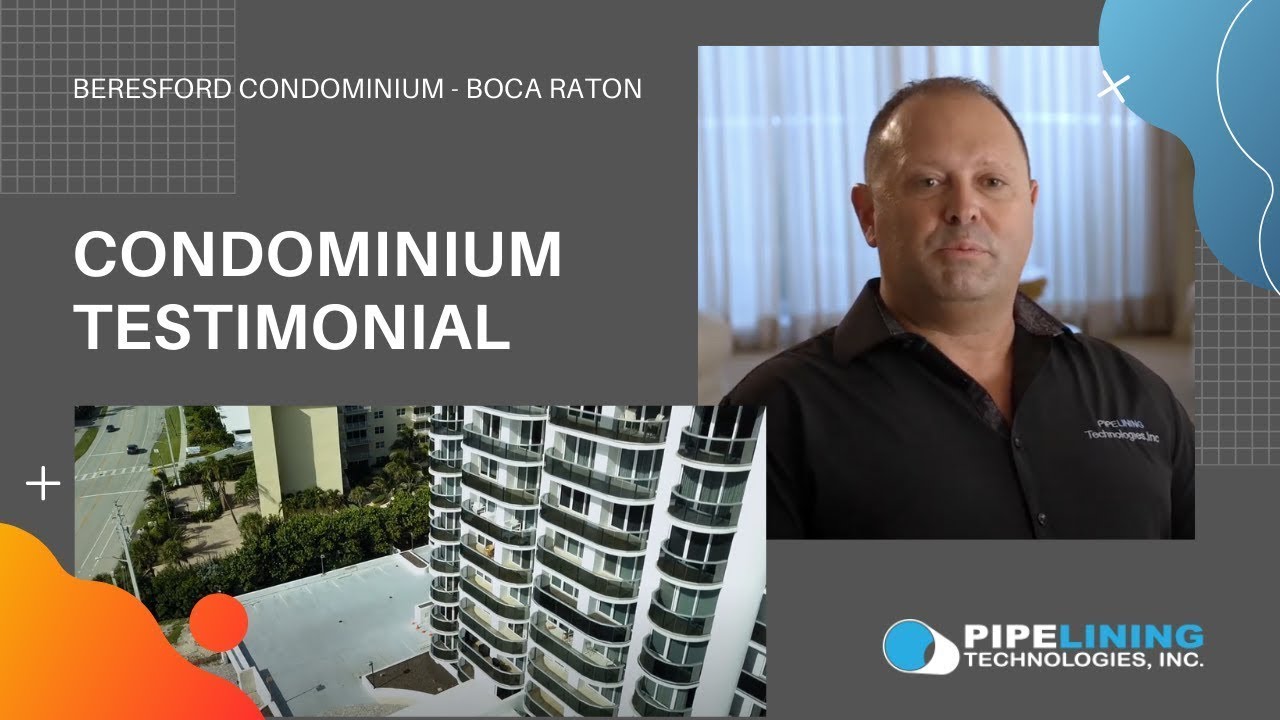 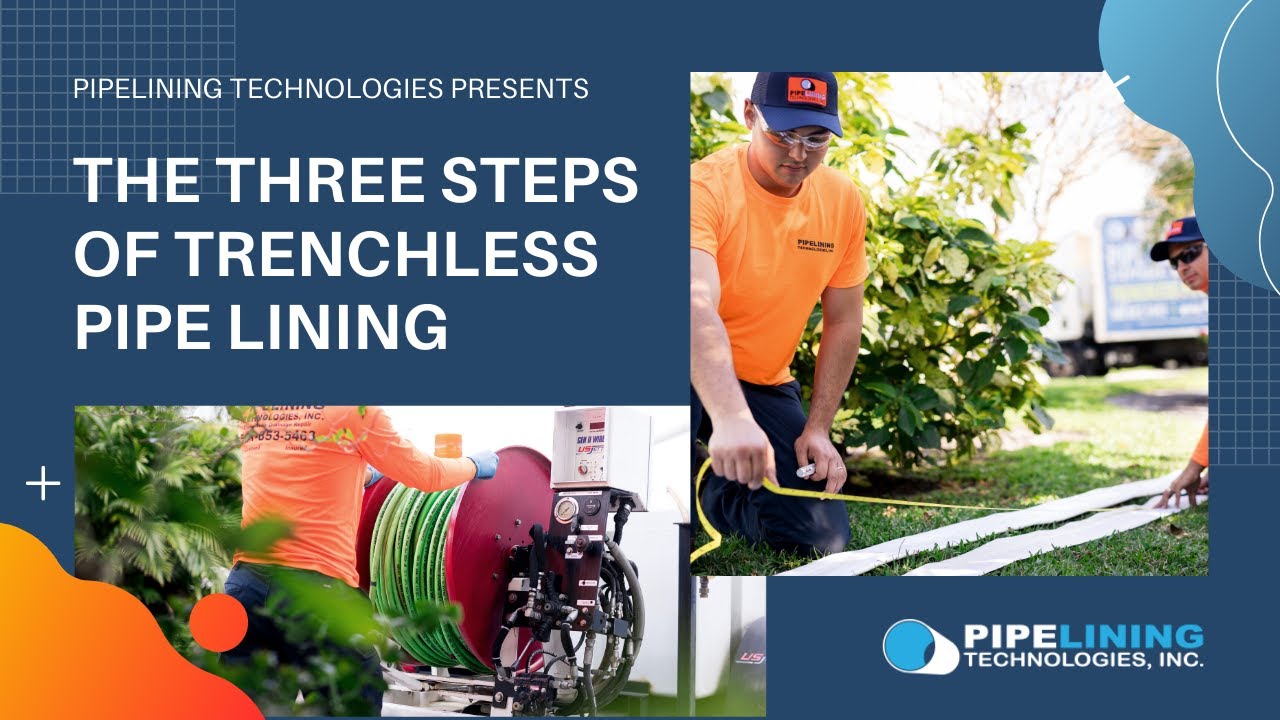 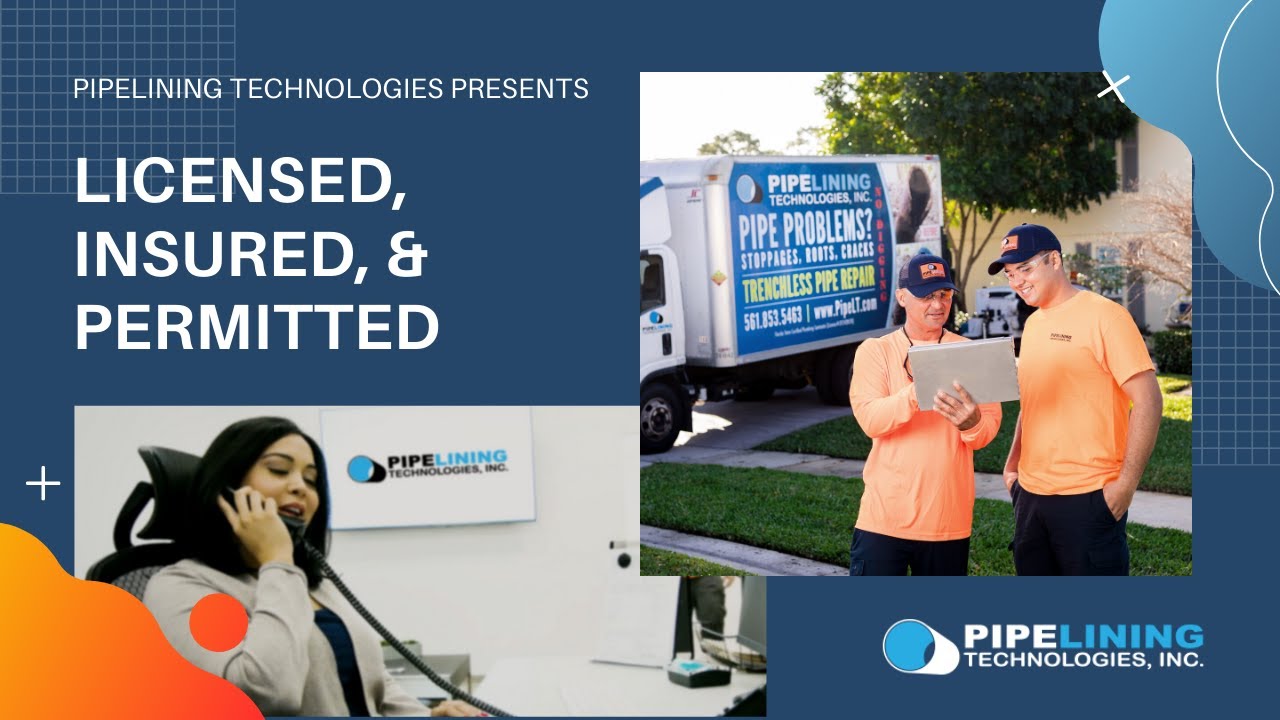 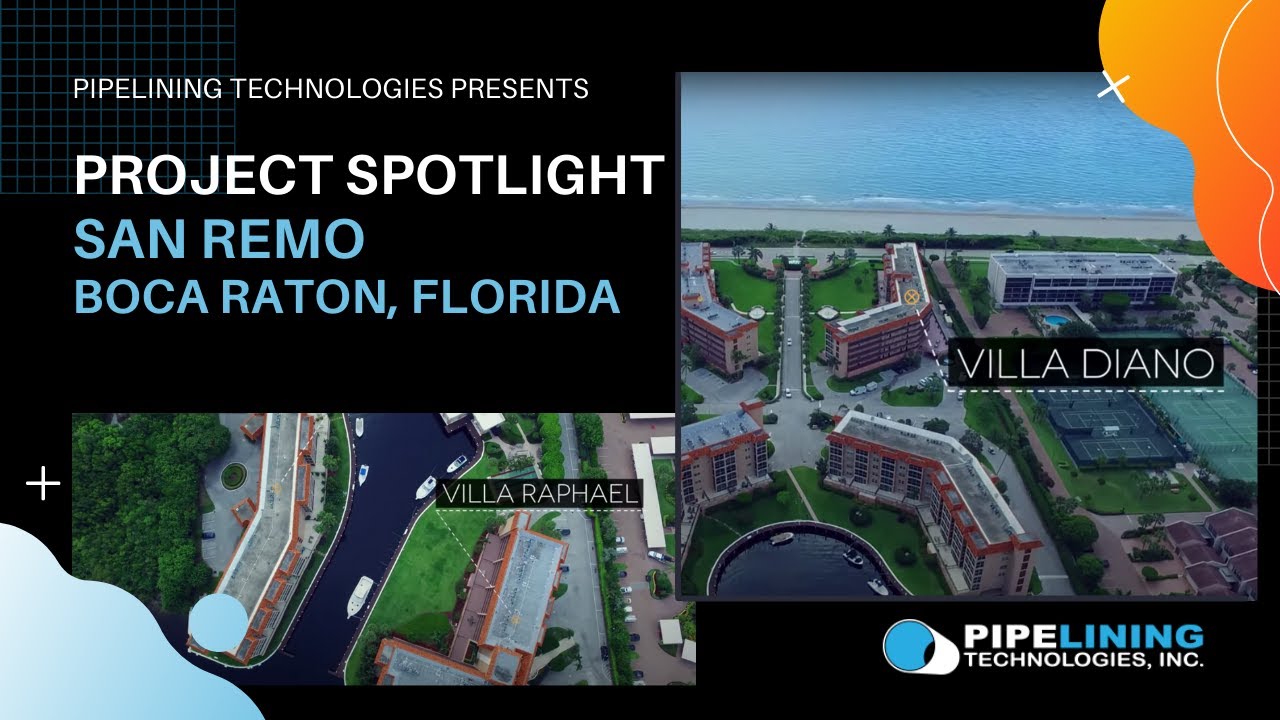 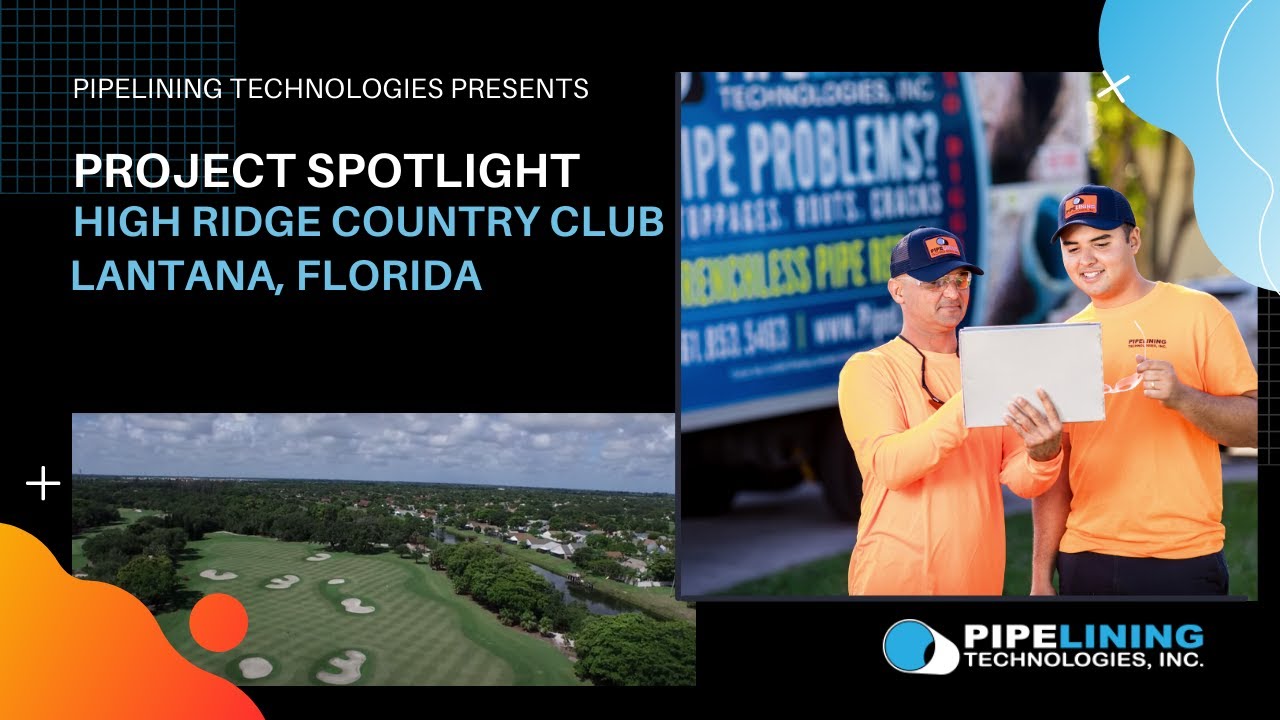 We begin all pipe lining projects with a detailed forensic study of the existing pipe system by means of a HD video camera inspection. A digital copy of the video is yours to keep.

Your cleaned pipes are lined with an epoxy saturated tube (liner). The tube hardens and the new structural line becomes stronger than PVC. Robotic equipment is used to reopen branch lines.

Learn More
Start Your Comprehensive Video Inspection Today!
Call Us at (561) 853-5463 To Schedule Your Inspection or
Schedule Online
Call Today

We provide trenchless sewer repair throughout much of South Florida. Don’t see your specific area? Give us a call; it’s likely that we can help. Click on the map below to learn more about our local pipe lining projects. And be sure to book a sewer inspection to find out the condition of your drainage pipes.

Deb H
This is one of my favorite companies to work with. They are extremely professional, very knowledgeable and really do care about the quality of their work. We've had them at our condo building twice now and I know I don't have to worry when they come. They do a great...Read More
Jon G.
We just bought a cute bungalow near my sisters in law. Home had a great deal of deferred maintenance including the sewer line/plumbing. We called several...
Neil Harley
Our 42 unit condominium in Juno Beach Florida has been experiencing cracking waste lines over the last 15 years due to aging, extreme heat and being located on the ocean. We contracted with Pipelining Technologies to line our waste pipes under the concrete slab in our carports. We chose this...Read More
Naomi G.
Having problems with the pipes under your house is never an easy problem to fix and it's never fun! This company is amazing. We had several different crews...
Christine Lucenti
We recently used PTI for a major pipelining project at the condominium that I was the acting Manager on and I have to say I had a great experience working with this company. They were professional, responsive, and transparent. Our Project Manager, Ren P. was easy to work...Read More
Lincy Clerisier
Melissa provide my company with all the information we needed so we could process with our closing on the property. She was fast and efficent!
Katelynn Schaffer
Pipelining Technologies did a fantastic job from start to finish with our piping nightmare. We spent over a year fighting with our insurance company to assist in getting out pipes covered and Pipelining Technologies was with us every step of the way. Ensuring progress wasn't stalled or there wasn't regression...Read More
View More

Take a visual tour of some of our projects to get an idea of how Pipelining Technologies, Inc. can help you on your trenchless sewer repair project.

Trusted By These Authorities

Pipelining Technologies, Inc. is headquartered in and serves the Palm Beach County, Florida area, providing trenchless sewer pipelining services. Here are some of the cities we serve: